A change in course: peer pressure or sound advice?

In a recent post I discussed how I was going to upgrade a few of the figures in my army for the Colonial GT. I had decided to replace four marines with Forge World marines.
In a conversation with Jawaballs about the direction I’m taking for my army over the next two weeks he disagreed with me (something new?) on what I should prioritize – the five non-upgrade marines or the new dreadnought. All the figures and the dreadnought come from Forge World so it’s not a decision based on “coolness” – they're all pretty bad ass – but how much of an impact the models will have on the different aspects of what I’m trying to achieve as a “tournament player.”
Our conversation focused on two aspects:
1) How much “tabletop” time will the figures/dred get?
2) What is going to impact my painting score more?
Tabletop time is a big factor. The five marines will replace the four marines in my non-upgrade five-man unit. That unit’s role in my army is to sit inside the razorback and shoot the vehicle's TL Lascannon at the opponent’s tanks, rhinos, and razorbacks. Thus the figures would only hit the tabletop battlefield if they were forced out of the razorback.  The Dred, on the other hand, is an important part of my “attack down the center”  section of my list. Its role is to follow my Land Raider and then support the Terminators when they charge into melee. So the dreadnought will be on the table the entire game. 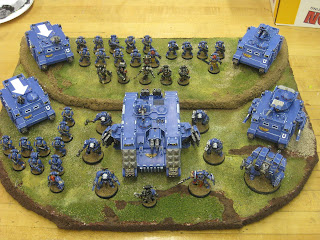 As for display purposes you can see that my Ironclad is on the front of my display board and the new Dred will take its place. Plus the model and banner are awesome. The four marines are at the rear on the right and are just four of the twenty five marines I have on my board. ( I am aware that I can reposition the stuff on my display board to put the four figures in toward the front)
All that being said I’m going to spend next week painting up the Dreadnought and then, if I have time,  paint up the marines.
Thoughts?
The Stout Smurf
Posted by The Stout Smurf at 2:19 PM