My non-game Colonial GT experience was awesome and the organizers of the event should be commended. The facility was awesome, the tournament was well run, and it seemed a good time was had by all.

As far as the tournament for yours truly it boils down to two words - Smokin' Boots!! 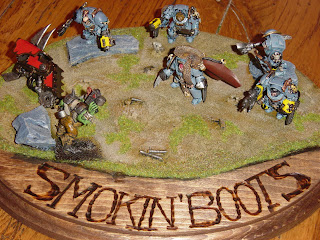 This is the trophy/diorama they gave for Smokin' Boots - A beautifully painted diorama by Ray O'Dowd.

For those of you unaware of who the Smokin' Boots are awarded to it is the person who comes in dead last. And that was me - I was outgunned, smashed, crushed, destroyed, etc. As far as I can tell there are three things you need to be successful at a tournament - a good list, a couple of favorable matchups, and luck with the dice. The Stout Smurf had none of these last weekend.

Game One:
I played a Space Wolves list that was run by a pretty pleasant guy. I would say he was more effective with his shooting as my Land Raider and Dreadnought were gone, blown up, by the end of turn one. that meant I had to either foot slog my Terminators across the board or Gate of Infinity them. GoI it was and the legion of the Damned came in near them. I thinking I'm in good shape until he shot the crud out of them and then assaulted. 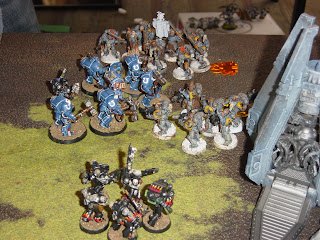 That fight raged the for a few turns with me knocking out a couple of units and a rhino but without fire or Dread support all I had standing at the end was a single Terminator with a thunder hammer. Meanwhile my shooting was terrible and he was able to close in on all Ultramarine units on my side of the board. I got tabled.

Game Two:
I was matched up with Rich T. who had a Sisters or Battle list. When Jawaballs came by the table after his game ended he wondered why I was playing a guy/list like this in the second round. Even the guy I was playing against was like "I know?!?" 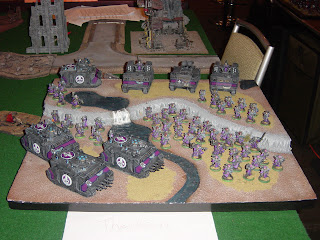 This army has all kinds of crazy faith point rolls that made the bad stuff happening to me much worse. In this game I was totally outclassed by my opponent. He used his vehicles to box my LR and Dread in and I was toast. I was too hesitant to commit the marines to the melee and as a result I, again, got tabled.

Game Three:
I played a double storm raver Blood Angles list. I won the roll to go first and deployed like I was going to. Then he rolled a 6 and seized initiative. For the second time on the day my LR was burning at the end of turn one. 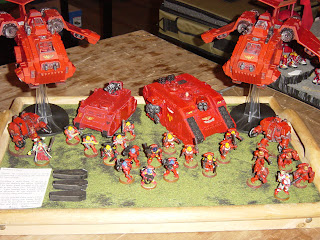 After the conclusion of turn two, where I didn't make a single saving throw in my first two turns, the guy felt bad and bought me a gin-and-tonic. Mephiston and the blood talon dread tore the rest of my stuff up. Tabled again.

Day one in the books and I didn't have a single game point. I was looking forward to day two.
Posted by The Stout Smurf at 11:13 AM