To All,
Entering day two I figure I'm going to have two opponents who are having similar luck, matchup, and list issues.

Round Four:
My round four opponent was running Demons. 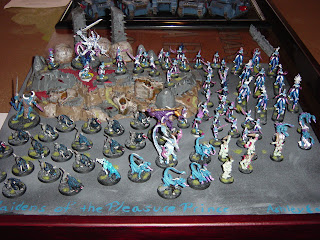 Again the dice failed me. I couldn't make a single saving throw the entire game. I didn't get tabled though and I did manage to get 6 game points. But Demons are nasty - the Princes and keeper of Secrets were wicked. 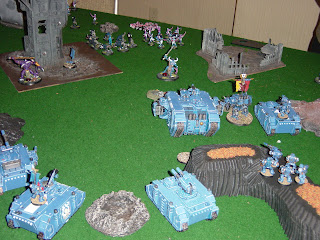 So this brings me to Game Five. I'm feeling that I'll be able to get at least a draw if not a win. I have 6 points, the guy I'm going to be paired against only has 13 points. But, as the weekend is going, they guy drops out and I'm then paired against the "ringer." The ringer is Ray O'Dowd and he has a "Deathwing" army and knows how to play it. He dismantles me and I end the tournament getting tabled. Ray was a great opponent and the game was incredibly fun.

Thus, I ended up with the Smokin' Boots. I would like to make it like the Stanley Cup - I'll hold onto the trophy until I present it to the Smokin' Boots recipient next year. That would be pretty cool.