The Brawl for Lunkhead's Brewery was broke down into two different styles of play by the attackers. On the right side of the brewery were what you would deem "Gnome Wars" guys, who just went balls-out all attack. No one check with anyone, there was no plan, it was just a race to the wall. 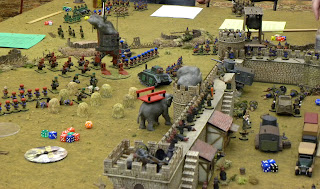 After a couple of turns here is what we had. The tank that was sitting in the breach was doing its job, keeping the enemy out while destroying the Clurichaun walker. the Sikhs marched forward, losing their tank and the driver for the elephant. The elephant ran amuck, crashing into and smashing one of the towers. but stayed on its feet. The Highlanders pushed the siege tower to the wall but the  Orangemen destroyed it with their tank.


The Highlanders resorted to using the ladders, and were successful taking the wall. Here we see a questionable decision by the defenders - the tank from the breach moves forward.... 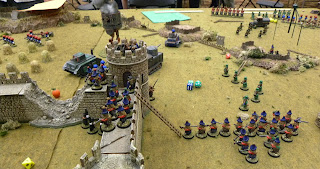 ....leaving the Irish Tank and the Blue Sikhs racing toward toward it. 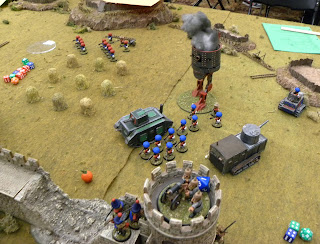 The next turns has the Irish tank inside the walls, along with some Leprechauns who "Rainbowed" in... 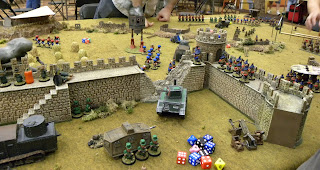 ...with the War Elephant crashing through the walls.

On the left we had "seasoned" wargamers whom had a plan. First off they knew they were facing off against the one of the better Gnome Wars players, Lon from Brigade Games, so they were careful. Here we have the British Marines marching out in order, making sure they have the ladders with them. You can see the Swiss doing the same. 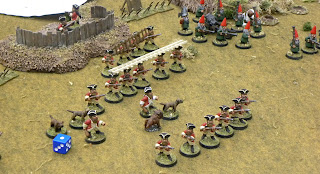 Another turn of the ordered advance... 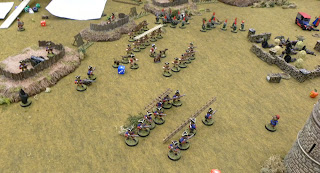 ...and here we have Lon sitting back, waiting for them to come.  Actually he is looking at the Undead and Union Cavalry battling out. My son, a Top Ten Gnome Wars player in his own right, understood the danger the Undead posed to the success of the attack, told the rest of the attackers that he would "handle it." They asked him what he needed, to which he responded "the Union Cavalry." An older gentleman asks if he can occupy the 112 figure Undead Army with 20 cavalry. "No worries" as he wipes out the 112 figures while losing 17. I'll take that ratio anytime. 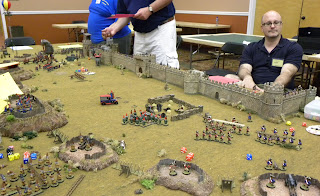 So with the right crumbling and the Swiss cheesing all the Pirates, Lon makes an easy decision.... 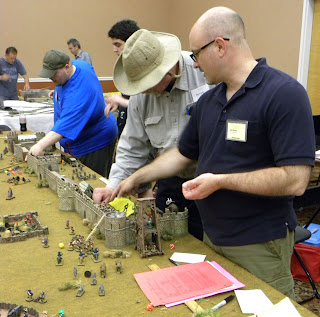 ...and packs up and gets away. 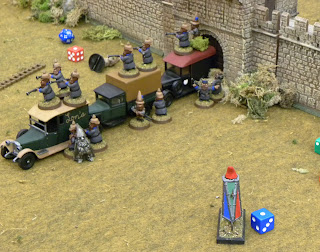 Lon did prove himself in this game as he got all three objectives: His unit, Lon's Lunkheads were alive, Lon was not captured/killed, and he kept possession of the "Cursed Gnome." The attackers did a great job getting in but focused on carnage rather than objectives, and came up on the short end because of it.

All in all a great game - with fun had by all.