Gnome Wars: The Battle of Saragarhi

Here is an AAR of the second game I ran at NJcon 4 - Gnome Wars: The Battle of Saragarhi 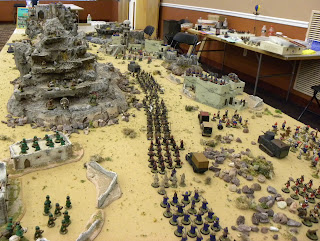 Description: Northwest Frontier Province - 1897. A signalling relay post called Saragarhi stands on a bluff mid-way between Fort Lockhart and Fort Gulistan to provide heliographic communications between them. On September 12th, hordes of enemy laid siege to Fort Lockhart and Saragarhi, with the aim of overrunning the fort while at the same time preventing Saragarhi for signaling for help.Twenty one Sikhs from the 36th Sikhs under the inspiring leadership of their detachment commander, Havildar Ishar Singh, resolve not to hand over the signal post to the enemy and seek safety elsewhere, go to the walls and wait for the assault. Havildar Singh knows well that Saragarhi will fall, because a handful of gnomes in that make-shift fort of stones & mud walls can not stand the onslaught of a six hundred enemy. These plucky gnomes know that they will go down, but they have resolved to do so fighting to the last.

Here is the set-up: The German column consisting of a tank, four units of Germans, the witch, and a unit of cavalry... 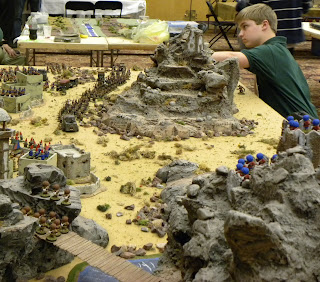 ...this fort defended by two small units of Sikhs. They do have their light tank and a War Elephant.

A small detachment of Swiss is holding a village near the fort. They have two heavy mortars, a bike tank, St. Bernard medic, Nurse , and a Cheese Thrower. 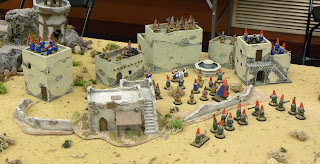 On the far end of the board the Irish have settled in to defend a small village against some pissed off and seeming out of place British Marines. 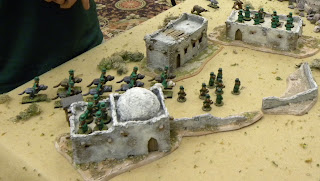 The Highlanders are defending their village against a smaller version of the Army of Undead. 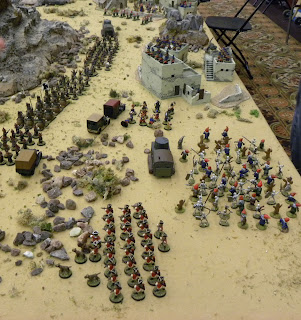