The Stout Smurf went to NJcon and put on two games of every body's other favorite GW, Gnome Wars.The first game of the day was Gnome Wars: The Brawl for Lunkhead’s Brewery. 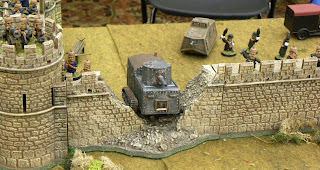 The set up/description for the game was as follows: Upset over the rising cost of beer Swiss, Irish, and Scottish gnomes attack Lon the Lunkhead’s brewery to secure their stash for the winter. Can Lon hold out, or will he have to make a run for it?

Here is the initial set-up for the scenario﻿: The brewery is inside the castle walls and the defenders are trying to 1) Survive until sunset, 2) Protect Lon the Lunkhead, the master brewer, and 3) keep possession of the "Cursed Gnome" statue. (don't piss on it or you will be sorry!)﻿ 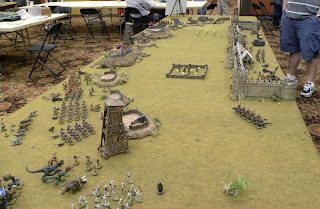 The Germans and Orangemen are holding the right corner and the gate. They are supported by two tanks and the Orangeman's wooden A7V. The German players decide to put their cavalry in reserve. (I thought it was a mistake to do so)﻿ 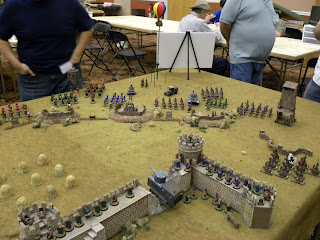 Attacking were three units of Scottish Highlanders, King Stanton's Irish, two units of Irish Cavalry supported by a walker, a tank (machine guns only), and the balloon (heavy machine gun).﻿ 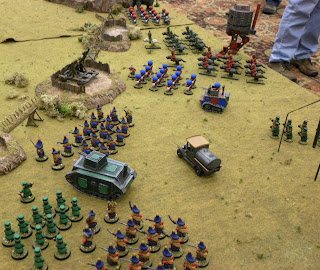 The Pirates, let by Captain Alvarado (single toughest figure in Gnome Wars), plus Lon's Lunkheads attempt to hold the left. ﻿ 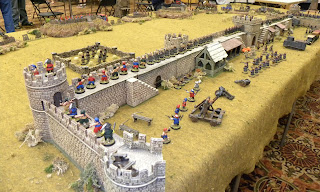 The Germans did have the Vampire leading the "Army of the Damned," which consisted of 60 zombies, 30 skeleton warriors, and 20 angry gingerbread men. They started outside the walls on the left flank. 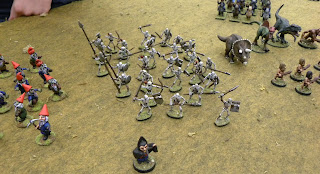 The Left was being attacked by two units of British Marines, three units of Swiss, a band of Gnomosapiens with three Dinosaurs, the Wizard (four wolves and two bears) and two units of Union Cavalry. (This is why putting the German Cavalry into reserve was a mistake - the attackers didn't have to worry about the Germans cavalry and could place their cavalry anywhere on the board - more on that tomorrow) 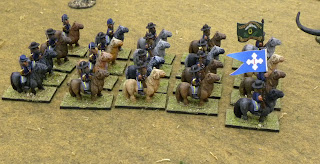 The Swiss get ready to tunnel...