Yesterday, after digging out from the snow on Saturday, Jawa and  I played a 300 point game that included "Huge" ships. It was really interesting and fun. 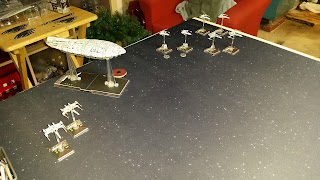 I flew a list of mostly named pilots. I know I could have gone all generics and filled the board with  ships but I wanted to see how the named guys(and gals) would do.
GR-75 - Bright Hope
Wedge Antilles
Luke Skywalker
Airen Cracken
Lieutenant Blount
Bandit Squadron Pilot
Bandit Squadron Pilot
Poe Dameron
Ello Asty 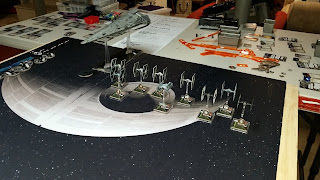 Jawa's Force. Mostly named Tie and First Order pilots. I don't have his exact list, but a lot of synergy going on.

(You can see our placement in the two pictures above.)

Heading into turn 3 I was starting execute my plan. Wedge and Luke, in x-Wings of course, head directly into the swarm hoping to inflict some damage in the first joust while Poe Dameron and Ello Asty come across the front of Bright Hope on the flank. The Z-95 Headhunters are moving down the edge of the board loaded out with cluster missiles in an attempt to take down, or at least put a hurting on, the Imperial Raider with 18 cluster missile shots. 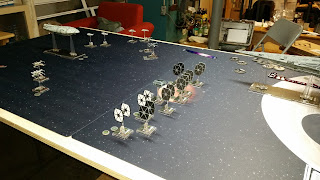 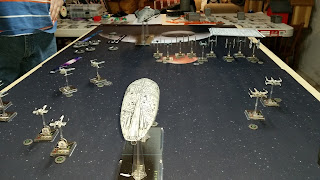 Wedge and Luke fire first and cause some hull points, but not enough to take out a ship. (I forgot to use Wedge's ability to decrease defender's agility by 1) Ello took out Howlrunner with Advanced Proton Torpedoes. The Ties  focused fire on Luke and took him down! 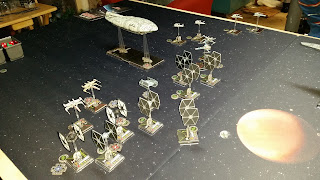 The Headhunters continue to the Imperial Raider 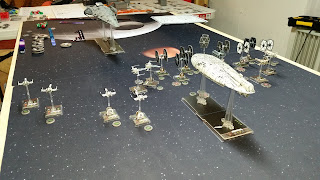 At this point I had hoped that Jawa was going to divert some of his fighters toward the Z-95 but he didn't. He kept to his mission of destroying the Transport. Bright hope is in trouble, and didn't last the round. 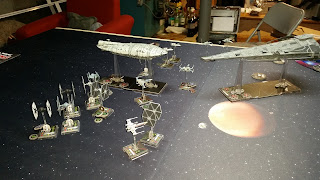 The Headhunters did get off the Cluster Missiles and got 4 hull points into the front section of the  Raider, but it wasn't enough. Jawa gets the victory. 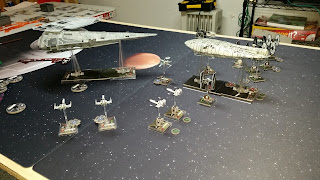 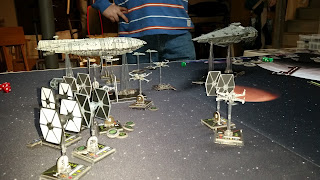 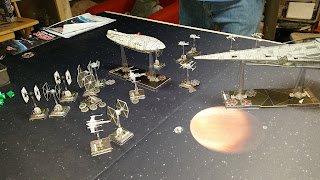 In conclusion, I liked Epic play a lot. I want to tweak my a bit and change strategy, but I'm looking forward to the next game.
Posted by The Stout Smurf at 11:05 AM