To All,
Here are a few shots of the Space Game that Mike Lung and I put on Cold Wars 2016.﻿ 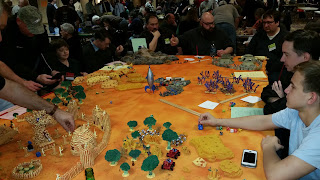 Different factions land on the cheese planet. Sensing the danger the native beings, the Frigonians, man the walls and get ready to defend their village. In the far right corner the Galacteers and the Valkeeri have set up a base while on the left corner the space orcs are moving in looking to scavenge anything useful. A ship lands next to the wreckage in the middle of the board - The Robot Legion has arrived. Haters of anything organic they are on the planet to find a deadly virus and secure a nuke!﻿ 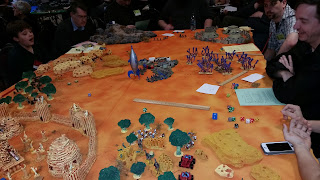 In the middle a group of Radon Zombies from the Ionosphere, along with their queen, have crash landed. In the wreckage the zombies are hiding a container of the "zombie virus" and, lo and behold, a couple of nukes.
Readers of this Blog will recognize Bill G (the smiling guy on the left) who was walking by and I asked him to run the zombies. He had another game in a couple of hours but played because I told him the zombies wouldn't last more than two turns. 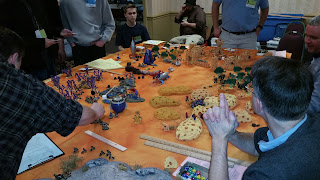 Hot on the trail of the Robot Legion, the Grymn arrive and start dealing with the Robots.  Oh no, a group of minibots have discovered the nukes. The Galacteers and orcs know they are in peril and move out to assist the Grymn. The Radon Zombies, taking full advantage of the shoot-out between the Robot Legion and everything else on this side of the board, start moving the Queen and the Virus to a safer spot.
﻿ The Galacteers use their jump packs to get into the fray. ﻿ 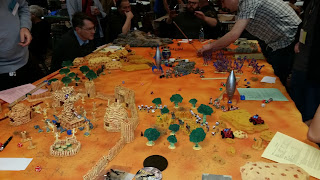 Meanwhile the space mice have landed and, being adrift in space, were low on supplies. They capture (and start eating) the Frigonians (who are made of cheese) and attack the village. The second Robot Legion ship descends and attack the mice in the rear. The mice send their vehicles to intercept the Robots 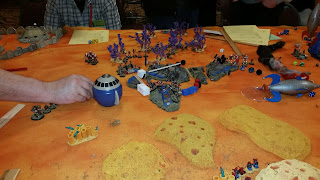 The Galacteers use their heavy weapon to destroy the Robot's ship, causing them to start a rear guard action while slowly moving towards their other ship. They leave the minibots behind to tie-up the enemy so they can escape.
﻿